Breathing is something that you take for granted until it becomes difficult. Functions like breathing, walking and sleeping we do autonomously and it is only when you are struggling to do the first two and yearning for the later that you start to value the simpler perceived functions of our body. How different would your life be if even one of these things were taken away from you? My body was definitely starting to get tired but I knew it was not as tired as my brain thought it was. This is when the mental game takes over from the physical. I knew the summit was still at least three hours away yet I could have fallen asleep in under a minute, so why continue? Why not call it a day, go for a sleep and come back tomorrow? Because I was being driven by more extrinsic motivation than intrinsic. The summit was not just a snow-covered peak at the top of Europe but a metaphor for the mental challenges that we all have which continue to grow higher, steeper and icier. The messages of support, donations as well as some of the personal testimonies about depression people have shared with me is more motivation than any selfish desire for a conquest could ever give me. I continued my walk along the saddle and out of the blanket of white I saw two American climbers Brendan and Dave who I met at Kurbol cafe days earlier. It was awesome seeing them as they were true adventure film makers who have summited Mt Denali, one of my future seven summits. After a couple of bro hugs it was back to business and we all (including the two polish climbers) stayed together through the saddle until we reached the final ascent of the second peak. Decision time #2, the final climb was going to be another two hours with deteriorating conditions and I was still feeling pretty average after climbing more than 1600m over eight hours and vomiting. I could turn back now and face that traverse and descent unsuccessful and really exhausted or face it successful and ridiculously exhausted. Once again I chose the later and was all on my own again as the other climbers had continued on to the summit. During the time I spent making my decision I re-fueled, hydrated, adjusted my crampons and add on another layer which helped me put my mind on the job ahead of me. With my third wind I started slowly ascending the steep pitch using the toe claws on my crampons and my ice axe. Because of the white out I could not see if anyone was in front of me until I reached the top of the section and made it to some rocks where the Americans and another climber were waiting to pass. The mountain patrol were setting up ropes and anchors because of the dangerous conditions, I found out later than two climbers had previously fallen off the slope but were tied together as a group so thankfully no one was injured. 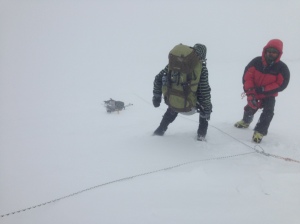 This sea to summit was now 99% complete but of course the last part has to be the hardest. Out of the mist a climber appeared and gave me a hug, and just as quickly as he appeared he was gone, two minutes later the same thing happened. I thought I was loosing it and having a mountain mirage but then the Polish climbers came up to me gave me a hug and told me the summit was only ten minutes away. Later I found out that hugging ascending climbers was somewhat of a tradition on this mountain and I looked forward to soon becoming the hug-er. Somewhere along the way I had passed Brendan and Dave and was solo again, just as I set out ten hours and a million breaths earlier. As i took my final 20 steps I reflected on this adventure and the people who had helped me. My sponsors, whanau, Edgewater College, friends, strangers, Georgian military, Bazoeva family, Abdul, Kazbek, Ryan, my support crew Rich and Zarina and of course I was never really alone with the big guy watching my back the whole way. Finally I was standing on top of Europe and the first ever known sea to summit of Mt Elbrus was in the bag. 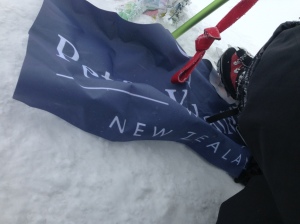 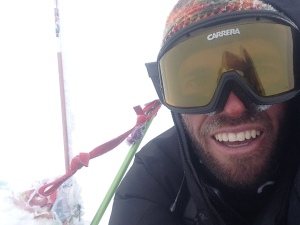 Like with any mountain you do not just magically appear back at your tent and often the most lives are lost coming down. I start my long journey back to safety and get to hug three more ascending climbers as well as bro five my new American mates who were close behind me but gave me my moment on the summit alone. Respect. I was finally out of the saddle and on my way down the traverse and I saw the familiar red jacket of the Polish climber. I had caught up to them because I was following the trackback feature on my Suunto watch so did not have to search as hard for the route. During conditions like this having the right gear can be the difference between success and failure, and life or death. Together we made it to the start of the main route where the snow cat tracks were visible and the whiteout was lifting. At this point I was so exhausted it difficult to tell the difference between my thoughts and reality but all i knew is that I had made it to the safer part of the mountain and I could start sliding down the steep terrain on my butt using my axe for breaks (glacading). I soon realised that i told Rich that I would be down by three and it was now 3:30 and he must be worried. Sure enough my phone was back to life (died from the cold weather) and there were two missed calls. I got in touch and he told me that he was waiting with a snow mobile at 4,600m. What a legend! When I finally saw him I am not ashamed to admit that I starting crying and told him “we did it”. He just laughed gave me a hug and said “shot brother, what took you so long?” Even though it does not sound like it, that was a kiwi male emotional moment right there. 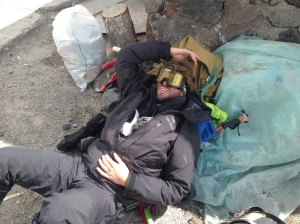 Right now all over NZ and the world people are battling the way to their own ‘summit’, so share some of the love and support you have given me and help someone else you know who is currently climbing. If you are suffering from a mental illness it OK to ask for help. Please do not try and do it alone. Talk to a mate, family member or lifeline 0800 543 354. Break the mold of the kiwi male. Cheers for following this journey and for all of the generous donations to date. You can make a donation to the charity by clicking on this link- Donate Take the path less travelled, and get amoungst it! Dave Williams